Smithing is a mechanic in Omake overhaul that is used to repair, enhance, craft, and fuse equipment.

Smithing allows you to create and upgrade equipment while training constitution.

It is an added item. These are rarely caught by fishing (rank of bait doesn't matter) and can sometimes be found at general or goods stores.

Hammer gains experience on every use. The more difficult a forging is, more experience the hammer receives.

As it gains experience and levels, so too does its ability to do more.

After a certain level has been reached, name of the hammer changes to reflect its current rank. It obtains the following ranks below.

By using (t) hammer on weapons or armors, some negative enhance values can be removed.

Along with an anvil, for creating weapons a furnace is required and for armors a furnace is required to be present on the current map. (Translator's Note: In Japanese version the 'furnaces' actually have 2 different words but in vanilla English both items are labeled as furnace and can only be told apart by their icons)

Using (t) hammer, you can create weapons by combining broken sword with either ore, skin of dragon, or Vanilla Rock. For creating armors any skin can be used. Players can choose the type of weapon or armor to create.

However, there is a chance for smithing to fail, destroying the item used in process. Chance of failing decreases with higher hammer ranks and PC's constitution and increases when using ingredients of higher value.

If miracle quality weapon or armor is created, you can select the name of your creation similar to how a name of scroll works.

In addition, on its detailed information window it will display "It is created by (PC's name)".

In addition, on its detailed information window it will display "It is created by (PC's name)".

This is only possible with a Journeyman hammer or above. An anvil must also be present in the current map.

Using (t) hammer, equipment can be enhanced in similar fashion to reading scrolls of enchant weapon or armor.

Maximum enhance value limit increases with higher hammer rank. Maximum enchant from a hammer is the 1/7 of the Hammer's level, rounded down. A level 21 Hammer will be able to enchant an equipment to +3.

This is only possible with a Journeyman hammer or above. An anvil and furnace must also be present in the current map.

There are some limitations to this however.

As hammer increases in rank, it can fuse more types of enchantments.

Maximum allowable limit of enchantment strength that can be fused increases with higher hammer level.

Higher level hammers gain less experience from lower quality ores, eventually getting no experience from them. The highest quality ore, a Godly Diamond, will train a hammer to level 80. Beyond level 80, monster skins from increasingly high level monsters must be used for experience. 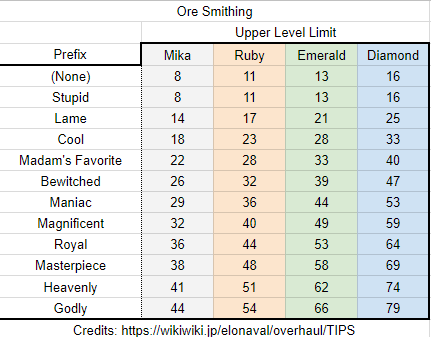 Higher quality ores give more experience, but are also hard to work with, and lower level hammers can not successfully create equipment with them.

Broken Swords can be found in (listing repeatable locations only):

The maximum hammer level in Omake Overhaul is level 2000.

In some OO variants, after level 2000, the hammer is enchanted with +1, and its level reset to 0.

In oomSEST, Blacksmith hammers can reincarnate, and various changes have been made.

You can now use more items beyond the broken sword as a base for crafting:

- animal bone let's you make ammo (the junk item, not the npc drop)