Living weapons are those artifact weapons with the 'It is alive' attribute, and which rarely start with any other attributes or modifiers. However, you may add your own preferred attributes to them through the level-up process. Therefore, they can be thought of as craftable artifact weapons. The material of a living weapon cannot be changed by scroll, however, so you'll need to find a material kit if it is generated with an unsuitable material. (Living weapons only get exp for kills done by the wielder that holds the weapon (pets can't give it exp)) (on another note it seems that living weapons tend to generate with up to 3 enchantments (grenade has its innate invoke with 1 enchantment up to rank 99 with the bonus gained from the material type, a non grenade will have 1 enchantment up to rank 99 and another up to rank 3 with a material type bonus if grants one)

Every time the weapon is used in combat to kill an NPC, it gains experience. The weapon's current level and experience are shown on its status screen, viewable through the eXamine menu, or on any menu by pressing x while the item is highlighted. When experience reaches 100%, a message will be displayed in green in the message log, stating that the weapon "has sucked enough blood and is ready to grow!". Higher levels require more experience. To initiate the leveling process, open your tools menu with t and select the weapon. Four level-up options will appear, and the first three choices you get will depend on the weapon's current name. The fourth option adds one level of enchantment to the weapon and is always available. If none of the options suit you, the process may be cancelled by hitting the Esc key. To change the first three options, you'll have to change the weapon's name. Note that the option to add one level of enchantment is not limited by the cap imposed on other methods (+6 in normal Elona, +10 in Elona+), so it's advisable to reach the cap first before using weapon levels to add enchantments.

Almost any time a living weapon levels up, there is a chance that it will attempt to add the "It sucks blood of the wielder." attribute. You can tell if a given upgrade will attempt to add bloodsucking by a message ("But you sense something weird...") which is generated when you open the level-up list. The chance is determined by the name, and the odds of any given name hosting the attribute increase as the weapon levels up, to the point where it is ordinarily unavoidable after level 15. This attribute randomly inflicts cut damage on its wearer, decreasing HP and inflicting bleeding status, and interrupting any ongoing auto-processes (e.g. fishing, harvesting, performing). However, the addition of this attribute can be avoided by renaming the weapon at the right time for weapon levels up to 15, and after that by manipulating the weapon's enchantments to exclude it where it would otherwise be guaranteed. See the sections below for more information.

Scrolls of name allow you to change the name of an artifact, which in turn changes the three variable options on the level-up list of a living weapon and may prevent bloodsucking. Each name has one attribute associated with it and borrows the other two from its immediate neighbors on the name list, including the 'Reroll' slot, so you may be able to avoid a bloodsucking name and still get the desired bonus by selecting a neighbor.

At the bottom of the page, the level-up list wraps around to the next page. Despite the 'Page 1/3' notification at the bottom of the name list, the next page can only be accessed by selecting 'Reroll', not by using the left and right arrow keys. In addition, if you move the cursor up and down through the list before selecting 'Reroll', it will advance the list by multiple pages, equal to the number of times the cursor moved. The names in the list always come in the same order, so if you know which page your desired name is on, you can go directly to it.

Scrolls of name are a rare drop from imp-type monsters, and can also be wished for with "scroll of name". A wish will generate three scrolls. Cursed and blessed scrolls function exactly the same as uncursed ones.

Material-given enchantments may be erased by this process like any other enchantment. The material enchantment can then be re-added by another material kit, forcing the next level-up to erase it again instead of adding bloodsucking. In this way, you may continue to increase the weapon's enchantment level or the magnitude of any attribute already stored on the weapon well past weapon level 15. This process can be repeated as long as you have compatible material kits.

Below is a rough list of the order in which enchantments are stored on weapons.

As no material provides a bonus lower in the list than "It increases your Life by 3." (Rubynus), the special damage bonuses cannot be stacked safely on a living weapon beyond level 15, in most cases. See equipment for a complete list of material bonuses.

In Elona+, the leveling system has been significantly changed.

Living weapons will now gain exp when wielded by pets, but still require the player to level them up.

The options displayed during a level-up are no longer assigned by name, so by using luck or savescumming the same option may be selected on subsequent levels without changing the name. The magnitude of the bonuses is exactly the same each time, however due to the way magnitude works the first bonus to any attribute is always stronger than the second and subsequent ones. The skill magnitudes are displayed in the standard way (via #), so the skill gain was confirmed using the Objet of Heart.

When leveling up, you will be presented with these choices:

This section contains outdated information about Elona+ builds prior to 1.43. Click "Expand" to show.

Could not immediately confirm the presence of: Lock Picking, Mining, Detection, Gardening, Cooking, Alchemy, Traveling, Magic Capacity, Sense Quality, Eye of Mind. If observed, they may be added to the appropriate category.

This section contains outdated information about Elona+ builds prior to 1.67. Click "Expand" to show.

(*) When adding Speed to a weapon made of a speed-enhancing material (tested with ether, spirit cloth probably has the same behavior, unsure about glass), the magnitude of the speed bonus from material is reduced to 100, down from the normal 200, resulting in a lot less speed than you would expect when adding speed for the first time. This happens both when the weapon is already made of the material and when it is turned into the material. Accordingly, turning the weapon into a material with no speed bonus will reduce the magnitude of the speed bonus by 100 instead of 200. Note: This was fixed some time prior to 1.67

The attribute added is random within the selected type, and is no longer affected by the name of the weapon (so savescumming and re-initiating the level-up will change the enchantment added). In order to compensate for making it easier to obtain the bonus you want, the maximum level for a living weapon without it sucking blood is now level 10. Levels 11-15 will always attempt to add bloodsucking, though this may be avoided with the material kit method above if you have enough enchantments. The maximum level for any living weapon is now 15, where it was theoretically unlimited (or possibly 2000) before.

To compensate for reducing scrolls of name to merely cosmetic items, their drop rate was increased substantially. Players may feel free to use them to rename any artifact whose name they dislike in the assurance that another will be produced by an imp soon enough.

Note: In Elona+ 1.17 there was a bug preventing living weapons from gaining exp properly. This bug was fixed in Elona+ 1.17fix.

Each enchantment category cycles through a list of possible enchantments as follows:

Weapon experience gained now depends on damage dealt instead of the level of defeated character.

Has a low chance to generate on weapons with godly or higher quality. Won't be sold by vendors.

"justice" will be prefixed to the weapons name. For example, "justice" attribute on a halberd will become "justice halberd" (or "justice steel halberd" if the name allows).

Has a low chance to generate on weapons with godly or higher quality. Won't be sold by vendors.

"evil" will be prefixed to the weapons name. For example, "evil" attribute on a halberd will become "evil halberd" (or "evil steel halberd" if the name allows).

Place ctalkweapon_{weapon name}.txt inside user\talk folder. When wielding you will be able to listen in to their chatter and idle complaints.

Available choices of dialogues are as follows:

To provide a more immersive experience for "role players".

Magnitude has a seemingly strange way to work, which causes the first bonus added to certain characteristics to be slightly higher than the subsequent bonuses added to that same characteristic and may also cause a bonus added on top of an existing bonus to be smaller than what would be expected.

However, the way is work is actually fairly simple. Firstly, for mysterious reasons, at 0 magnitude, the bonus to stats and skills is equal to +1 instead of 0, while for resists it's equal to 0 despite it showing a #. I'm not sure about other characteristics like elemental damage, but they seem to have a positive bonus at 0 magnitude like stats and skills. And the progression from 0 magnitude towards increasingly negative values follows the same logic as the progression from 0 to increasingly positive values, instead of following a purely linear scale, resulting in a large interval centered on 0 where a bonus to stats/skills is +1, whereas the bonus to resists follows an almost linear progression from negative to positive values. To better understand what happens when magnitude values are modified, please read on.

As an example, consider a bonus to the any of the main statistics (STR, CON, SPD, LUK, etc) or any skill. As magnitude increases from 0, the bonus increases linearly from the initial +1 at 0 and at 50 magnitude it reaches +2 points. Any intermediary values get rounded down and, because attributes are always an integer, any magnitude value between 0 and 49 is rounded to +1 point (however intermediary values are considered in resistances). In the same manner, any magnitude value from 50 to 99 will be equal to +2 points, any value from 100 to 149 will be equal to +3 points, etc. In conclusion, if you began with 0 or any positive magnitude value, every 50 magnitude added will add +1 to the stat bonus.

For resistances, the bonus at 0 magnitude is equal to 0 resistance (despite the # in the item description) and it increases or decreases in steps of 5 until it reaches 25 resist at 50 magnitude or -25 resist at -50 magnitude, progressing in the same logic as described above.

Abnormal behavior, such as a non-ether equipment with +1 speed bonus ending up with +4 speed when turned into ether instead of the expected +5 (as the speed bonus from ether has 200 magnitude), stems from the fact that there's a bigger magnitude interval where the bonus is +1, namely from -49 to 0 and from 0 to 49 (in other words, from -49 to 49). The 200 speed bonus from ether material would equal to +4 speed ONLY if it was added to an existing speed bonus with a positive magnitude. If your speed bonus of +1 point had an initial magnitude of, for example, -40 (which gives a bonus of +1 as per above), you will end up with -40+200=160 magnitude, which is equal to +4 speed. 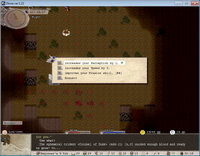 "Ready to level up" message 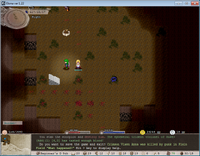 Level up menu in the newer versions of Elona+
Community content is available under CC-BY-SA unless otherwise noted.
Advertisement