Elona Wiki
Register
Don't have an account?
Sign In
Advertisement
in: NPCs in Elona+, Level 40-49 NPCs, Missing AI,
and 3 more

The giraffe is Elona+'s mount creature. Like other creatures of the Horse race, it spawns neutral in dungeons, and can be bought from the Yowyn Horse Master when your level is 70. It's ideal for riding, since even the basic version is faster than the horses, cub, T-rex, and Yith.

The giraffe can be evolved into an improved creature of the same name, using a <god heart>, gaining 25 Strength, 10 Dexterity, 10 Perception, 20 Will, 35 Speed, and a new sprite.

It should be noted that the evolution of this creature from "Giraffe" to "Giraffe" does not make much sense as it is currently translated, but refers to both the mundane giraffe (called "Kirin" in Japanese) and the Kirin or Qilin of Chinese myth, in much the same way that "Kitsune" means very different things when referring to the mundane fox and the supernatural fox-spirit. 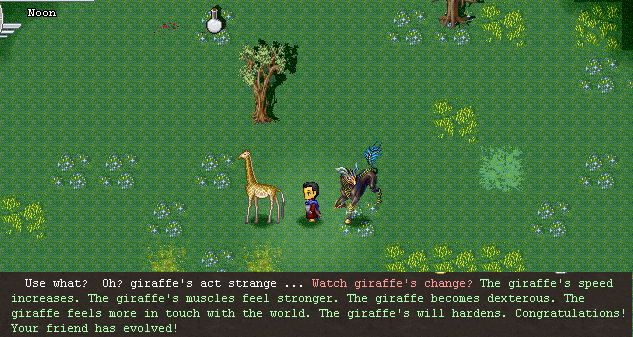