Equipment pieces in Elona Mobile is the main source of power for a character and what you will work upon the most if you want to reach high levels.

As such, an understanding of the mechanics involved on it is of key importance.

Example of an equipment

The Image to the Right shows an example of a Endgame equipment piece.

The equipment in question is a helmet, crafted for a Martial Arts focused character that is also a vampire.

In the numbered version, we can see the different parts of importance in a Elona Mobile equipment piece: 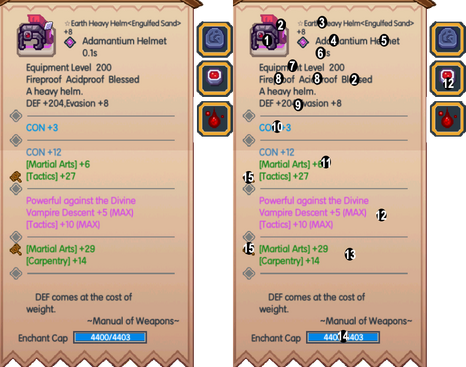 The weight of weapons determines how it can be used.

The total armor weight of your equipment determines what armor class you are.

Equipment weight can modified by changing materials or using scrolls of flying.

Changing materials will change other stats of a equipment piece while changing weight with scrolls of Flying won't.

Using heavy armor class has no innate benefits, so unless you have a reason to, like ally traits or red equipment needing heavy armor, you should try to get yourself to light armor when you have enough Scroll of Flying to do so.

Equipment can be categorized by Rarity. The Rarity is a general indicator of an item's price, strength and rarity, but there are many exceptions, So don't judge an item or piece of equipment until you read the description.

Rarity is shown as a color background on the item

Equipment Rarity doesn't correlates to quality. Red items are unique but very often worse than a player made purple or orange. With some reds being worse than having a empty slot (Corgon Ring or Ragnarok).

Red equipment are 'Unique'; you can only equip one of each in your party.

Luck can upgrade the rarity tier of a equipment piece when it drops from monsters or when using a garok hammer by one tier, it's not sure how the exact formula is.

All equipment and often some items have a material modifier, which will change several characteristics of the item.

Do note, only the weight modifier can be used directly, others need to be input on a formula to obtain the final value of a equipment.

But due to the formula being multiplicative, materials with double the modifier should have close to double the attribute when compared to other material.

Also, this list doesn't contain the data of which materials are fireproof/acidproof which are related to the equipment material, if the equipment isn't of red rarity.

Things of special importance to note

To change the materials of equipment or furniture, use a scroll of change material, these scrolls come in 3 types, inferior, normal and superior.

You can upgrade them at Jewel Tool

The list for each scroll, as well as if they are blessed or cursed affects the list of available materials for each:

Do note how adamantium is in the superior material list, but not on the blessed version. And even when using the right scroll it is extremely rare to get.

Your equipment can be damaged by acid or fire if it's not Acidproof/Fireproof, making its enhancement level lower.

Equipment can be enhanced to give a higher Defense on armor or Damage on Weapons.

Blessed gear gives you a hidden +1 enhancement as a bonus.

Cursed/Doomed gear gives you a hidden -1/-2, while also being unable to be unequipped.

You can uncurse equipment by talking to a healer in towns, using uncurse spell or Scroll of Uncurse.

A Blessed Scroll of Uncurse will uncurse all items in your inventory.

You can target curse an item by talking to a NPC in Samuel, it needs a scroll of curse.

Equipment level has the following effects:

The current maximum item level is 200, with red equipment having always the same set item level.

From this data, we know that the most reliable ways of getting level 200 equipment:

Equipment can have slots where you can add socket items for bonus effects.

Red equipment can have 0~1 slot

Other equipment can have 0~3 slots

You can add one extra slot by using a drill, once per equipment.

For any operation involving sockets, you need to go to the abode of the witch, where you can :

Element Stones have legacy versions that people usually refer to as "Chaotic", the look like and are named as tier 4 elemental stones, but instead of the normal bonuses, they give +111 RES or 32.20% Bonus Damage, which are higher than the highest tier. These Chaotic Elemental stones can be rarely obtained from quests, rewards or dev fuck ups and can't be re-rolled at the abode of the witch.

You only need a single instance of "Powerful against X", "Makes you Float" and "Resist X" in your gear to give you full effect, this counts equipment enchantments or socket items.

Elemental stones socketed on a weapon will only give their bonus to that weapon. When socketed in armor they'll give the bonus to all weapons, but with a -10% penalty.

For more information about equipment