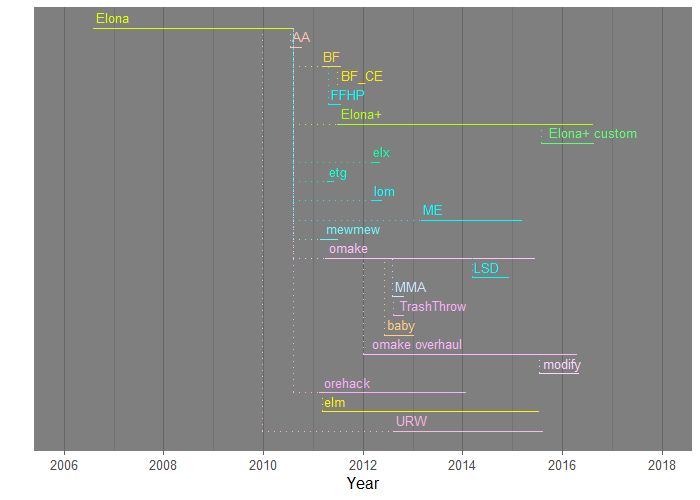 What are Elona variants?[]

Development on Elona stopped in May 2010.

Third party developers with access to the source code have since made their own modifications on the game. These variants of Elona that they have created are called Elona variants.

Overview of some variants[]

Contains only bug fixes and optimizations. For people who don't like Elona variants nor the bugs remaining in Elona 1.22.

Implementation of Acts II and III of the main quest with new enemies to go with them, new items, and more special actions. Training and leveling is very much different compared to vanilla Elona. Also fixes loopholes and abusable features.

Better sprites for some items like cooked food, herbs, fishes and fishing junk, and some potions. e.g. Pornographic books will be instantly recognizable as such.

Short for CompactExe. Optimizes the game even further (apparently at the cost of some stability). Some game data has been extracted and packaged into external database files, increasing customization and decreasing .exe file size.

Short for Enhanced Love Miracle, named after the lovemiracle function in Elona that handles lactation and egg-laying. Centered around but certainly not limited to sex, egg-laying, lactation, and more sex.

English translation for quests and items, along with features like customizable pet AI.

Transpilation of vanilla 1.22 to C++ and Lua. Will support multiple languages and include Lua modding support to add features from other variants. https://github.com/ElonaFoobar/ElonaFoobar

A variant that focuses on the card game.

Bug fixes, improvements to the Void, and increased customization.

Bug fixes, expands upon some aspects of the game like farming and cooking, with new skills, items, spells, and enemies.

A variant of Elona omake MMA that removes balance-changing aspects added in MMA, but otherwise keeps all the content added in omake.

This variant contains your younger sisters! And a pet creation system, dungeon/town management, increased customization of items and NPCs, and many more features.

Party time! Gameplay is similar to omake, but adds many more features centered on bards and music tickets.

Omake variant but with the ability to strengthen pets and NPCs even more, and with custom maps and custom world maps. Save files are compatible with omake, and *possibly* with other variants as well. Has some features from the AA variant, like the Eulderna/Asseria continent and pet synthesis from monster parts.

Greater differences between races and classes, pets that are useful outside combat, new uses for items and skills, quests, minigames, ability to create new spells, and more. Abbreviated as OOM

Omake overhaul but with useful features like being able to bash all fruits off a tree at once, more info on the character sheet, more info when targeting, and coating your weapon with potions.

Based on: omake overhaul Ex

Based on: omake overhaul Sukutu

Stylized as oomSEST. It is a large mod focused on balance, quality of life, expanding the end game from OOMSE, and adding content to South Tyris.

Based on: omake overhaul modify

Ports a lot of features from other variants (omake, MMA, orehack, baby, AA, etc) but has plenty of novel aspects as well that change game balance.