What's on your mind?

So I just started playing Elona+ for the first time. I was also struggling in my Elona game, as my character had incredibly bad stats (I realized its really hard to start off as an Elea wizard). I wanted to try Elona+ since it had more to explore. Here's what I started with: 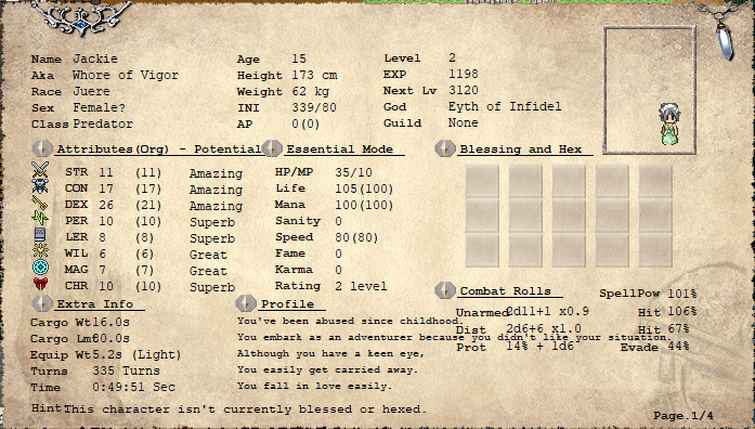 Any tips for what I should do first? The Beginners guide is very sparse, and I started with only the tutorial bow and arrow, no other equipment. I did the "Early Trick" but as I had no armor I died quickly, only managing to level up once.

EDIT: after further reading I realized the Predator class is an unarmed class, thankfully I built it like that, but I'm not sure if being unarmed early on is smart or not

I want some help with this and where should I make the suggestion to hand it off? It is about replacing the Wizard's Harvest book into a scroll, since it doesn't follow the rule of being sold by the spellbook writer if you read the book. Also to make adjustments to it in several ways.

Hello, yesterday I opened Elona+ 2.07 graphic files and found something interesting. There's 2 graphic named bg40.bmp and bg41.bmp. I wonder what and where event which display that graphic. I know it's nsfw one but I'm curious.

Edit: Nevermind. Under the once-a-day relationship talk option at the bottom of the list.

Is there a way to disable equipped gear showing on my character? I'm using custom sprites and as soon as I equip a breastplate or something, the custom sprite is covered up. I feel like I've done this before, but I could be mistaken.

Note that English translations for the new content have not been added yet, but I hope to include them in the next release.

To install, extract Elona+ 2.05 somewhere, then copy the contents of CGX's archive to the same folder, overwriting all existing files.

Here are the extra changes that Custom-GX adds in addition to 2.05's content:

See the included changelog for a detailed list of changes.

Additionally, the source code has been cleaned up significantly and split into separate files resembling 1.22's original source structure. This should make contributing to the codebase much easier than before.

If you encounter any bugs or other issues, I recommend creating an account on GitHub and reporting them from the link at the bottom (under the "Issues" tab). If not, feel free to comment on this post instead. 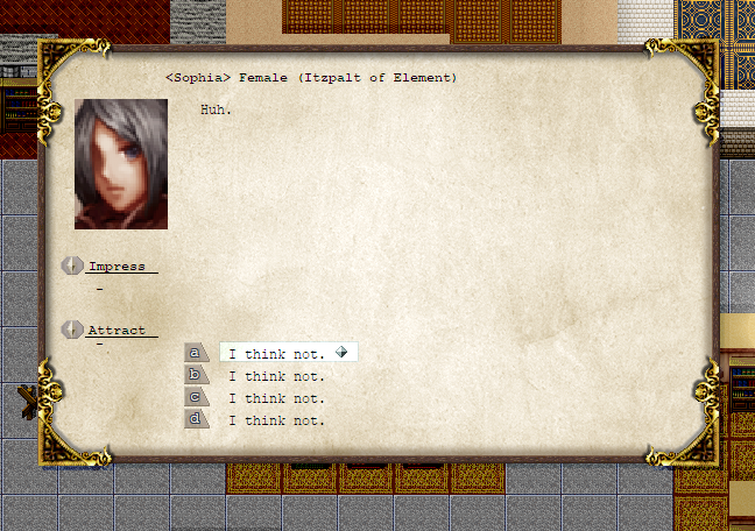 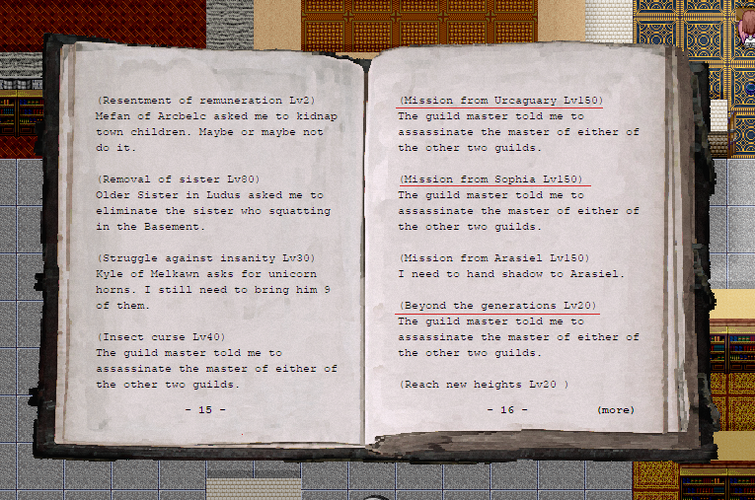 Just leveled up and learned this in ECG+ 1.90, no info about what this is or does on the wiki.

What are the memory converter for? When i use them the skill goes down

I finally finished working on the decompiled HSP source code management tool I mentioned the other day.

It's written in Java, so it should theoretically be able to run on any computer. The JAR file is under Releases. Depending on how you're set up, you might be able to run it by just double-clicking it; otherwise you can run it with the command "java -jar ElonaCustomizer.jar".

I checked to make sure everything worked before posting this, but I'm still an amateur programmer here, so let me know if I made any easily-fixable gaffes.

I know how to get the character sprites from character.bmp. However, what if the in-game version has a tint? How were things like red putit obtained?

Two NPCs in E+ apparently, but there's no page on them or what their deal is in the wiki.

I have killed the Meshura Plant 4 times now.

But the Journal stills says that i should team up with the soldiers,

The doctor doesn´t give me an Quest item to proceed.

I can´t get new limbs for the PC. Only for the Allies.

Am i missing something?

Anyone know the best way to earn money elone mobile?

I got this error:

It´s on the map of the "Revenge Mountain" map. The problem is, that i can´t get out of this map. I can´t use Scroll of Retrun/Escape or get to the Stairs. When i move or do something (1 turn) it´s crashing back to desktop. Already tried to use debug mode. Running on Elona plus (2.04) with Custom (1.90).

There is a Monster but Its just a blank tile. The Name of the Monster ist "."

Anyone can help? Is there a way in wizard mode to get out?